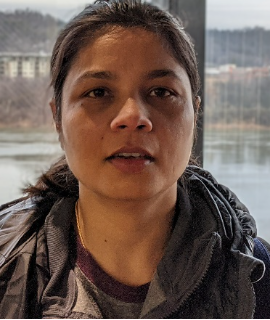 Title : Determining the role of obesity on the transmission of chikungunya virus by mosquitoes

Mosquito-borne alphaviruses like chikungunya (CHIKV), Mayaro (MAYV) and Ross River (RRV) virus are distributed globally and cause sporadic disease outbreaks characterized by chronic debilitating polyarthralgia. Of these, CHIKV is the most medically relevant due to its re-emergence over the last two decades, leading to major outbreaks across Africa, Asia, Europe, and the Americas. Emergence and re-emergence of RNA viruses like CHIKV is due to their rapid and error-prone replication that enables them to adapt to varying environmental conditions. One such mutation (A226V) in the E1 protein of CHIKV expanded its vector range and improved its transmissibility to the vertebrate host. However, a critical gap exists in identifying the host factors affecting the transmission of arboviruses by the vector and leading to its emergence/re-emergence. Recently it was shown that the obesity-related microenvironment promoted the emergence of virulent strains of influenza virus and has been identified as a risk factor for severe disease outcome for other viruses like SARS-CoV-2, WNV and several alphaviruses. This is concerning because obesity affects ~13% adults globally and 43% adults in the United States. Here we show that obesity reduces the infection and transmission of CHIKV by mosquitoes. To understand the influence of obesity on alphavirus transmission, we utilized a natural transmission cycle between CHIKV-infected lean or diet-induced obese (DIO) mice and Aedes aegypti mosquitoes. We showed that mosquitoes fed on CHIKV-infected DIO mice had significantly lower infection and transmission rates than those fed on CHIKV-infected lean mice, despite ingesting similar amounts of virus. Towards understanding the host molecular drivers influencing this shift, we found significantly elevated insulin levels in DIO mice at peak viremia, as compared to lean mice. Mammalian insulin has been shown to reduce the replication of various arboviruses in mosquito cells and live mosquitoes through the involvement of mosquito antiviral immune pathways. RT-qPCR analysis on the midguts of mosquitoes fed on CHIKV-infected DIO mice showed significant upregulation of genes associated with various mosquito antiviral immune pathways, in alignment with insulin’s impact on mosquito antiviral responses. Based on our preliminary studies and literature support, we hypothesize that insulin present in the blood of alphavirus infected DIO mice activates mosquito antiviral immune pathways, thereby limiting infection and transmission of the virus as compared to those fed on infected lean mice. Although studies demonstrating the role of insulin in reducing viral infection have previously been published, they suffer from drawbacks: a) none of them have used a natural transmission cycle between mammalian host and mosquitoes; b) none of them have shown the effect of insulin on transmission of the virus, which is the most relevant component of vector competence and c) with the exception of one study, other studies used insulin at concentrations much higher than the physiologically plausible levels in a mammalian host. With this study, we are pursuing the novel concept that obesity alters the transmission of arboviruses which would lay the foundation for future mechanistic studies to isolate the component(s) in an obese host responsible for this effect.

What will the audience learn from this presentation?

Pallavi Rai completed her Bachelors in Veterinary Science and Animal Husbandry from G.B.Pant University, India in 2008 and her Post-graduate Diploma in Agri-warehousing and Supply Chain Management from MANAGE, Hyderabad, India in 2009. She is currently a third tear PhD student in the Weger-Lucarelli lab at Virginia Tech. The focus of her research is to study the effect of obesity on the transmission of alphaviruses like CHIKV and the disease severity of coronaviruses using the mouse hepatitis virus (MHV) as a model coronavirus. She has published 1 article and co-authored 3 articles till date.